CINDERELLA THE SURVIVOR
Once upon a time, in a far, far away land, a young girl lived happily with her loving parents - until her mother died.

Cinderella's father didn’t remain single long. He remarried a cold, cruel woman who had two daughters of her own. Then Cinderella’s father died.

Did his new wife murder him? When I read this fairytale as a child, this thought crossed my mind. With Cinderella’s father in a grave, Cinderella’s stepmother gained control of the estate. Cinderella became vulnerable to the jealousy and greed of her stepmother and two stepsisters.

Cinderella grew to fear them as she experienced emotional and physical abuse by the evil trio. Together, they bullied her. She was violently assaulted by her stepsisters while her stepmother encouraged and laughed as they ripped the pretty dress made by her mouse and sparrow friends into shreds – while she was wearing it.

Cinderella was denied her heritage, humiliated, and forced to become a servant in her own house. In the Disney version of the tale, Cinderella had no power and no choice but to obey.

Cinderella is often depicted to be a frail and passive girl who waited to be rescued by a prince. She didn’t stand up to her abusers by physically fighting back. Cinderella was seen to cry and crumple into a defeated mess on a garden bench as she fought to maintain her sanity in her heartbreaking situation.

Cinderella was a victim. We tend to blame victims for their misfortunes. Why do we express unfair prejudice against them? We need to believe that those who follow the rules are protected from disaster and that justice is served to wrongdoers.

While it is true that some victims may be responsible for their hardships with unhealthy life choices, innocent victims threaten our false sense of security. The idea that bad luck can be random, striking anyone at any time, is a frightening thought, so we panic and push the victim away so their troubles don’t become ours.

When her world seemed hopeless, Cinderella’s day dreaming and dissociation became a powerful healing journey into joy. She learned how to survive because she realized trivial things have no real value next to the true friendships she shared with her animal companions.

Cinderella grew an inner strength from her creative mind, faced adversity head on, and masterminded a plan on how to rescue herself. She chose kindness and optimism even though it made her appear weak. She was brave enough to allow her true beauty to shine when she chose to forgive the unforgivable: her stepmother and sisters.

She did these things without the prince being involved.

Life can be heartbreaking and dangerous. Circumstances can push us into a black abyss of despair and hopelessness where we feel empty and broken.

Brokenness can be a gift if we allow it to make us stronger and more capable of dealing with life and change so we can grow as a person. Wounds in our soul let in the light and show us where we need to transform into something truly beautiful. Brokenness allows us to empathize with others who are experiencing some of the pain we have walked through.

A few of us seem to slip through life with a fairy godmother at their side at every turn of their lives and believe, “nothing bad could ever happen to me.” Most of us have obstacles to tackle. Some are devastatingly unfair while others are tedious and wearisome. We have our version of evil witches and villains with which we must contend.

I experienced the murder of my disabled son and I was accused of the crime. My civil rights were denied when my daughter was taken from me. I wanted to end the pain by ending my life. I was empty inside. As I curled into a fetal ball I reached outside of myself and realized my surviving child needed me to stay alive. She became my purpose and I learned to stand up and fight to expose the abuse, the truth and the lies - and seek justice for my children.

My passion is getting the message out that no matter how awful, heinous, shocking, and monstrous, something good can come out of an event or series of events that are wretched and horrible.

Cinderella didn’t strive to be the prettiest girl in the ballroom. She was happy with a handmade gown, but she ended up wearing an enchanted one – plus magically delicate glass slippers. She never became bitter, developed a sense of entitlement for all the wrong she had survived, or sought to get even with her wicked relatives. We identify with her because she never allowed the abuse she suffered to wreck her joyful outlook on life.

Disney fairy-tale movies typically have blissful endings, but that's not always realistic. Not every person experiences a happily ever after. Not every orphan becomes a princess and rides off into never, never land on the back of a white horse with a prince and his crown.

After I share the complexities and tribulations of my life, or after people finish reading my book, From Miracle to Murder: Justice for Adam, some are disappointed in how I wrapped things up. Somehow, they expected an ending out of a princess Disney movie. They forget how Cinderella forged her own future with her courage and attitude. Nightmares and PTSD will always haunt me, most members of my misogynistic Message cult family continue to regard me as a heretic, I didn’t become a princess, and my prince didn’t ride up on a charging white horse.

He rode up on an obnoxiously loud custom Heritage Harley. I bought my own 1200 cc Screaming Eagle Sportster and joined him. Cinderella had her sparkly dress and tiara but black boots, a red bustier and tight jeans became my statement of  feminine independence and power.

For more stories on how to stop child abuse:
https://www.aslongasibreathe.com/2019/10/stop-child-abuse-why-choose-to-not-abuse.html 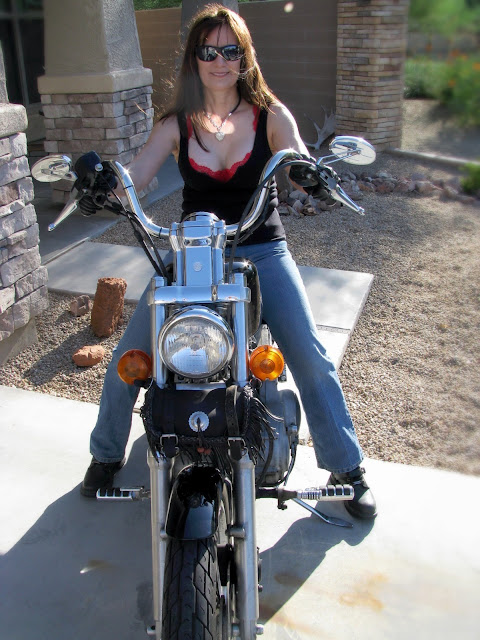 Joyce A Lefler is a true crime survivor and the author of
From Miracle to Murder: Justice For Adam.
She is a facilitator for Parents of Murdered Children,
a bereavement counselor, registered nurse,
and an advocate against abuse.
Connect with her: