A CULTURE OF MISOGYNY


Could Three Dog Night be wrong?
Yes.
One is not the loneliest number.
Try being less than nothing.
A nonentity.
Try being a zero.
Were you ever last in line because no one chose you?
A zero is invisible.
A zero is a woman whose bruises are ignored.
The shame of receiving them silenced me for a while.

I cried out for help to my pastor, my father, my grandmother. My mother scoffed at me. They told me it was my fault. It didn’t do any good to cry.

The sweet scent of citrus was strong on the breezes coming through our open screens. Palo Verde trees bent under their yellow flowers of spring when my husband hit and abused me in front of our children again. His fists to the left side of my skull split open another migraine. His screams, rage, and violence frightened them. I believe he had murder in his mind this time.

I needed to survive to save my children. I called emergency services when he finished.
I never called them again. 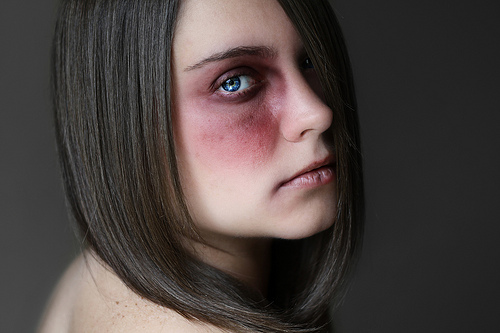 Two male officers swaggered into our house. They saw the angry bruise swelling my eye, the black tears staining my face, the tiny child in my arms whimpering with fear, the second one hiding behind the couch. They adjusted their leather belts, stood with legs apart, looked at me, and frowned. They turned to my husband. The three men eyeballed each other, puffed out their chests, and nodded. It was 1976 and a culture of misogyny  pervaded society. Men could do as they wished with their wives. The younger of the two officers closed his paper pad and put away his pen.

The older one glared at me and said, “We don’t want to come back here. Next time, just do what he says.”

When people ask now, “Why didn’t you just leave?” It is obvious they had zero understanding of the grief and damage caused by the culture of misogyny back then. Women were considered to be intellectually, spiritually, and physically inferior to men. They needed a man to tell them how to function.

Fear plays havoc with the mind, especially when violence cools and cycles back around to begging for forgiveness or excuses are expressed, “I was drunk,” or “I promise, if you take me back, I will never do it again,” or worse, “you made me mad.” When the victim is told it is her or his fault there is confusion and self-doubt.

I may have been a zero, but my children were immeasurably wondrous miracles of God.  The day I took a step back, slid over, and shielded them from the switch in their father’s hands that was intended for their bare skin, I took a step forward and away from fear. Breaking the cycle of abuse became a choice for me and my children. It is the heritage I wanted to give. I had zero money in the checking account, zero food in the cupboard, zero credit, no cards, no history of having a job, and zero ability to support the children without my husband’s paycheck. Not a single member of my family or church said, “I care enough to help.”

Starting over took a super charge of energy and courage I didn’t have. I had to dig down deep and find those extra volts of power. I found them in the faces of my children as fear for their father’s fists and screams was replaced with hope and joy.

Sometimes it’s not only okay to be alone, sometimes it’s better. When time isn’t wasted on the impossible task of pleasing an abusive partner, there’s time left over for reflection, making lists of what I would need, and a plan to leave.

Sometimes the number one is the best number of all. Becoming a one was the first step in becoming who I am and who I needed to be for my children. I needed to become ME.

Getting the word out, becoming aware, and then doing something about it, will help eliminate the prejudice that some people have, that abuse is the victim’s fault. It’s getting better but we have a long way to go until we make zero tolerance of abuse the norm.