MEMOIR OF FORGIVENESS - JOY IN THE WIND

JOY IN THE WIND 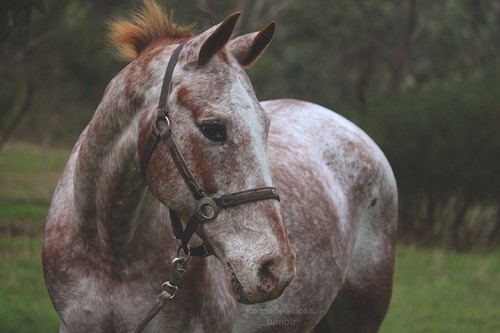 My parents bought a one quarter crazy, three quarters lazy, Appaloosa gelding for their kids. There were six of us and they thought we were bored. We weren’t bored. We were too controlled. Our parents kept a watchful reign on our activities, were selective on who we played with, didn’t encourage us to mingle much, and there wasn’t a lot for us to do after school that they approved. My father was a religious isolationist and didn’t want us to socialize with our peers. His parenting bordered on abuse. Giving his kids a horse allowed us to give him the gift of forgiveness. It also accomplished everything he wanted. It kept us busy mucking out a barn.

B.K. Showtime’s name was soon shortened to Bambi. He was a young red roan with white speckles and spots all over. We thought he was adorable. My siblings and I learned gymkhana, western trail, and halter class and entered him in local shows. When he was in a good mood, the weather wasn’t too hot, or too cold, and he wasn’t in a temper, he puffed out his chest, pranced his steps, and became the son of a national champion that his papers said he was.

I fell in love with him and clung to him as if he were my best friend. I was too young to have secrets but made some up and shared my loneliness with him.

When Bambi obliged, I learned how to fly. Jump up, swing over, adjust my body to his back, hold his mane, look up, not down. Our muscles tensing, leaning in, ears pointing back asking for instructions, get going, faster?  Touch, tug or pull on the reins, letting go, encouraging forward, follow the wind, breathe, locks flowing, whipping my face, merging two spirits with the purpose of life.


When my younger brother Wayne was sixteen, he began working as an apprentice for a mechanic. He wasn’t paid in dollars, he was paid in trade. The mechanic gave him a beat up dirt bike that Wayne rebuilt into a super stud ride. It took me about five minutes to learn how to shift gears, brake with my feet, rev the engine, and adjust the speed with my hands. We lived in the middle of nothing Mojave Desert. There were no trails or rules or regulations as to where or when we could go. I tore up the tumbleweeds, scared the lizards, startled the coyotes, rolled over sand and rocks, and choked on silica dust.

When I was a child, I tasted abandon on Bambi and that bike.

Adulthood hit early and hard until I broke the cycle of abuse. After my second ex left me, I had to take a second job. Except for two days every other weekend, I had our children full time. They were nine and eleven years old. When I wasn’t at work, I mowed the lawn, shopped, cleaned the house, washed clothes, and balanced the checkbook.

My ex’s betrayal ate at my mind. Anger gnawed at my bones. In spite of how much I fought, I began to slip in the mud. I needed to fly again but I was done with men. I had $5000 to spend.

A good horse cost more. A horse needed grain and hay, a farrier, a vet, saddle and tact, a trailer, a truck, a corral, a barn. A horse needed to be fed and watered twice a day. It needed to be ridden and groomed – and loved. Horses are social animals. Having one by itself would be lonely for it and cruel. I would need to find a safe stable but it would have to be close to home where I could visit and ride every day. How much free time did I have? Almost none. A horse is needier than a dog and would exacerbate how overworked I was.

I could park a motorcycle in the garage. It would need to be washed and taken to a mechanic occasionally, but it wouldn’t poop or pee in my yard. It wouldn’t require the daily attention a horse needed yet it would give me the autonomy and breeze I craved.

Wind, rain, pebbles, bugs, coming my way, stinging my face, sticking in my teeth. Making slight body adjustments to stay in the seat, looking forward and center, adjusting for the curve because roads aren’t straight. Sight and sound are glorified: fear, exhilaration, fun, freedom, stop thinking of doom or death if you hit a bump or hole. Exhilarate in the power of your machine, glide with currents, flying through the world. Ride easy. Ride afraid - not of your skills but with fear that four wheeled vehicles who won’t see the two of yours. Ride with panic and joy. Crazy contradiction but worth it when I throw my leg over, kick down the gear, roll back the throttle, ease back into stitched leather, check the mirrors, startle the kid ahead in a mini car, bellow, belch, thunder roll!

Randy roared up on a custom Heritage Harley. We were two people who got together to talk about motorcycles. We didn’t listen to the rules. We talked true about money, our ex’s, sex, abuse. I saw the tears in his blue eyes when I heard him cry. With Randy by my side and offered advice when I bought a Screaming Eagle ape hanger 1200 cc Sportster. We rode single file. We rode side by side. We were wild.

Fifteen years ago, before a Justice of the Peace, we married – for the last time. 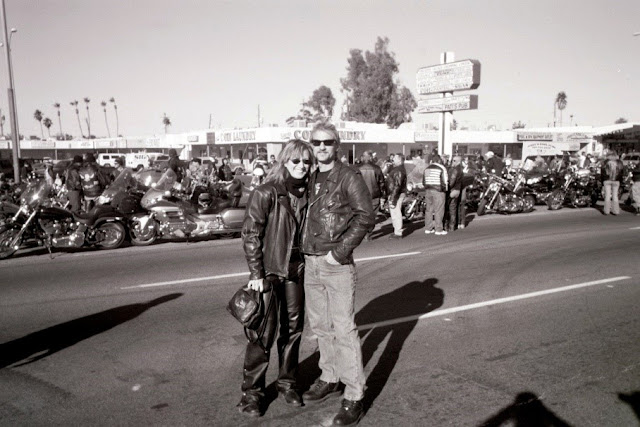